Fake News: What Leaders Can And Can’t Learn From It 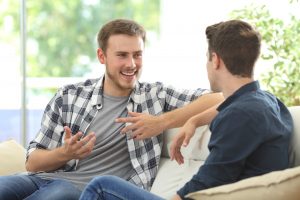 We the people, without question, are currently outraged, divided, and confused by an overwhelming amount of recent news and information being slung at us from every direction. Some of the news is real. Some is complete fiction. However, most of the news we hear is a weird concoction of half-truths and incomplete facts mixed with our own personal understandings, perceptions and opinions of the world. This is actually where the concept of fake news gets interesting…because we’re not talking about politics.

Fake news (a.k.a. misleading conversations) isn’t something born during the recent election. It’s been around forever, and it actually exists in the workplace as both employees and leaders attempt to influence others both positively and negatively.

So, what can we, as leaders in the corporate world learn from fake news? Can it benefit us in any way at work—by changing the way we give and receive information?

Well, to start, let’s talk about what we can’t learn from fake news—the facts. Yes, creepy clown sightings, selfies being classified as a mental disorder, and yes, political salaciousness (on both sides of the isle) can trigger a ton of interest and emotion. But, they are often just that—intentionally crafted information geared at eliciting fear, anger and reaction regardless of how ‘real’ the information truly is.

So, if we can’t learn anything from the facts involved in fake news, we should be able to gain some insight into ourselves as to why we seemingly love to consume fake news.

The Society for Personality and Social Psychology recently released a paper focused on finding out the cognitive processes, ideologies, cultural demands, and conspiracy beliefs that cause smart people to resist scientific messages…and instead believe fake news.

“Merely talking about ‘evidence’ or ‘data’ does not typically change a skeptic’s mind about a particular topic, whether it is climate change, genetically modified organisms or vaccines. People use science and fact to support their particular opinion and will downplay what they don’t agree with,” the paper states.

We asked our friend Dr. Kevin Fleming, Founder of Grey Matters International a decisional neuroscience-based executive consulting firm, for his thoughts on what types of information can actually have the power to change our minds. His response was fascinating saying, “Humanity is not against change,” said Fleming, “…humanity is against being changed. It’s important to understand the brain’s resistance and optimize your decision making map. The human brain wants to feel right. So, we will often only cognitively accept the information that makes us feel right.”

The article was contributed to Forbes.com by David Sturt and Todd Nordstrom